If you’ve followed this web site for a while you might remember that every year in December Harriet and I fly out to Cambodia and Laos and spend three of our English winter months – December, January and February - over there in the sun with friends in SE Asia. It’s always a wonderful time and we’ve grown to love those beautiful places and the many lovely people we’ve come to know over the years.

Because of that, at home in England this year, instead of focusing on drawing as I usually do, I decided put a lot of energy into various ‘This one’s for Laos’ fundraising ideas and began working at making connections, with the idea of introducing our friends in England to everyday stories of Life in Laos.

The background to that is that while many people over here are very familiar with Thailand and Indonesia and maybe Cambodia and Vietnam as possible holiday destinations in south east Asia, very few of them have heard of Laos and most of the people I meet in England don’t know where it is.

So, earlier in the year we started a This One’s for Laos facebook group that has given people here who would otherwise have known nothing anything about it, a graphic picture of some the tough everyday challenges our friends in Lao face.

We saw photos showing the devastating rainy season floods in Luang Prabang and the tragic consequences that overtook thousands of villagers in the south of the country when a Korean built hydro-electric dam there burst, completely flooding and destroying six villages without warning, killing many in the flood and leaving hundreds if not thousands more homeless, with nothing left of their possessions or their former village lives.

I made a This One’s for Laos display stand to take to indoor and outdoor events in England, to give me an excuse to talk to people about what’s going on in Laos and to sell my artwork to raise money for the cause. And I had a new batch of artists greetings cards and original lyric posters printed so that I will have plenty of affordable items to sell at future fundraising events.

All of those small but time consuming initiatives worked out well and it means that I’m now equipped and ready to get into a programme of fundraising with my artwork and music.

On the other hand I was disappointed that a few of the other things I put a lot of energy into came to nothing in the end. I had planned to put on a fundraising gig this month with a handful of my talented musician friends who offered to perform for free. But in the end it took so long to arrange a suitable free venue and a possible date that our friendly arrangements fell through – everyone was too busy! - and I had to give up on the idea. Likewise with a couple of outdoor arty events I planned to go to.

So, all in all, it’s been one step forward and two steps back as they say, but I haven’t given up. Recently I’ve been to a couple of local markets where I could set up a stall next year and I’m having some promising conversations with a ‘family’ band about doing some fundraising at their gigs.

Meanwhile my main focus has been on making music. My son Ben, who is a sound engineer, is currently mixing and editing nearly two hours worth of videos of me performing my own songs on guitar and singing.

It’s all in preparation for a new acoustic project I have planned. I’ll be inviting some of my talented musical friends to choose a tune and then make a video of us doing a duo version of it. 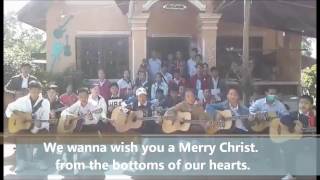